A review of Jann Arden’s If I Knew Then

Only a few pages into Jann Arden’s new book, If I Knew Then: Finding Wisdom in Failure and Power in Aging, I am convinced she’s borrowed a tiny piece of my own experience with grief and put it on the page in my stead. 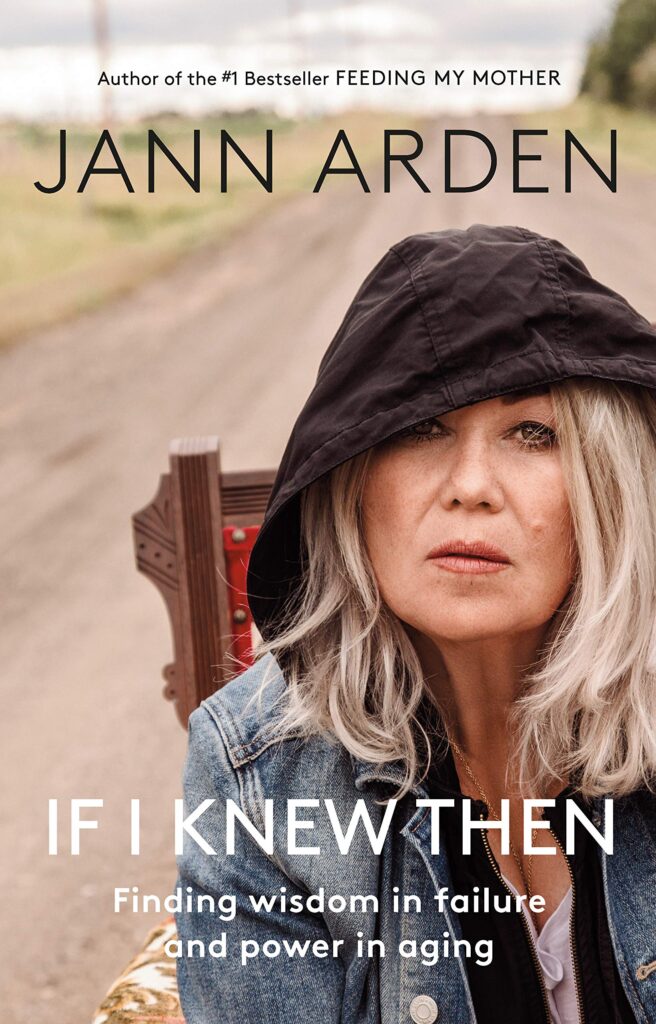 In her opening vignette, Arden describes trying to disconnect her deceased father’s phone line. I too wrestled with a telecom giant after my own dad died, and our experiences were mirror images. Arden and I both met with recalcitrant service agents unwilling to help, after failing to produce impossible-to-find account numbers, while being subjected to the indignity of the same pitiless hold music.

“Insensitive,” Arden’s breakthrough anthem, would have been a more appropriate, if ironic, choice.

Even the wretchedness of death and the hellishness of its attendant paperwork can’t dampen the undercurrent of Arden’s gallows humour. As a passionate fan, perhaps I expected a more earnest, angsty book. But of course, stand-up comics can be dour out of the spotlight. So why can’t an oft heart-broken songstress be funny?

I read If I Knew Then cover to cover on the eve of my 42nd birthday. The timing was impeccable. I was feeling a little melancholy, and this slim volume proved the perfect antidote.

Sober second thought
Arden — who will be opening the (virtual) Issues of Substance Conference in November, co-hosted by Canadian Centre on Substance Use and Addiction and the Mental Health Commission of Canada — doesn’t pull any punches about the roundabout way she came fully into her own.

It’s through that clear-eyed lens that she’s open to recounting her journey, stumbling blocks and all. Her book is a mediation on the power of failure to teach us our most valuable lessons and a celebration of the insight and fortitude that deepen as they marinate over time.

In our hustle culture, where youth is king and running the rat race promises a badge of honour, Arden’s thoughtful prose is a reminder. Slow. The. Heck. Down.

As a woman who has found hard-won meaning in health, friendships, and work, Arden takes none of these blessings for granted.

She writes in language that is both intimate and informal. This isn’t prescriptive self-help; it’s more like “no pressure” help-yourself. You get the feeling that writing the book was as cathartic for Arden as it will be for her readers.

Finding success by embracing failure
We often have ideas about what success looks like. Arden peels back the layers of her own rise to stardom with poignancy and humour, assuring us that even Juno Award winners can look in the mirror and find fault with what lies behind it.

What was most interesting to me is the perspective Arden offers to those coming up behind her.

Of her alcohol addiction, Arden writes, “For me, the old saying about needing to hit rock bottom was true.” It was in claiming her self-respect and becoming a person of her word that ultimately silenced the doubts that drove her to drink in the first place.

Like many creative types, Arden’s other medicine was music. And this memoir is as much a love letter to the power of singing and songwriting as it is to her sobriety.

When I say the book was a perfect choice on the eve of my 42nd birthday, I’m referring to society’s preoccupation with the attributes of youth — especially when taken as synonymous with beauty and self-worth. Arden refuses to buy into a narrative where women diminish with age, becoming all but invisible in a society that, as she put it, “seemed to have little time for women who were over thirty-five, women who had lost their curb appeal and their usefulness.”

Not just skin deep
Instead, she has found that with age comes the maturity to wield the kind of power and wisdom born from disappointments, failures, and losses, the kind that remould a person time and again into a more empathetic, caring, and feeling human being.

Early on in her career, Arden sent out dozens of demo tapes in an era where grunge reigned supreme and a female singer-songwriter baring her soul, acoustic guitar in hand, could easily have been drowned out. Or worse yet, counted herself out.

Arden’s success hardly came overnight. Like others, she heard “No” countless times. But she also understood, deep in her bones, that you need just one “yes.”

Her big break was neither a fluke of fate, nor a stroke of luck. While timing was key — a recently heart-broken producer who zeroed in on Arden’s soulful potential — it was her unflagging persistence and refusal to bow under the weight of rejection that secured her future success.

“Destiny,” she writes, “is just another word for determination.”

Understanding failure as a teacher and age as the ultimate expression of its wisdom are at the heart of Arden’s book. She refuses to worship at the altar of youth, instead embracing the virtues of the “crone.”

“Becoming a crone,” she concludes, “gives you the sense and the stability and power to be who you are.”

Turning the trope of a frightening, wizened old woman on its head, Arden invites readers to contemplate the value of a beauty that isn’t skin deep.

What a perfect birthday gift.