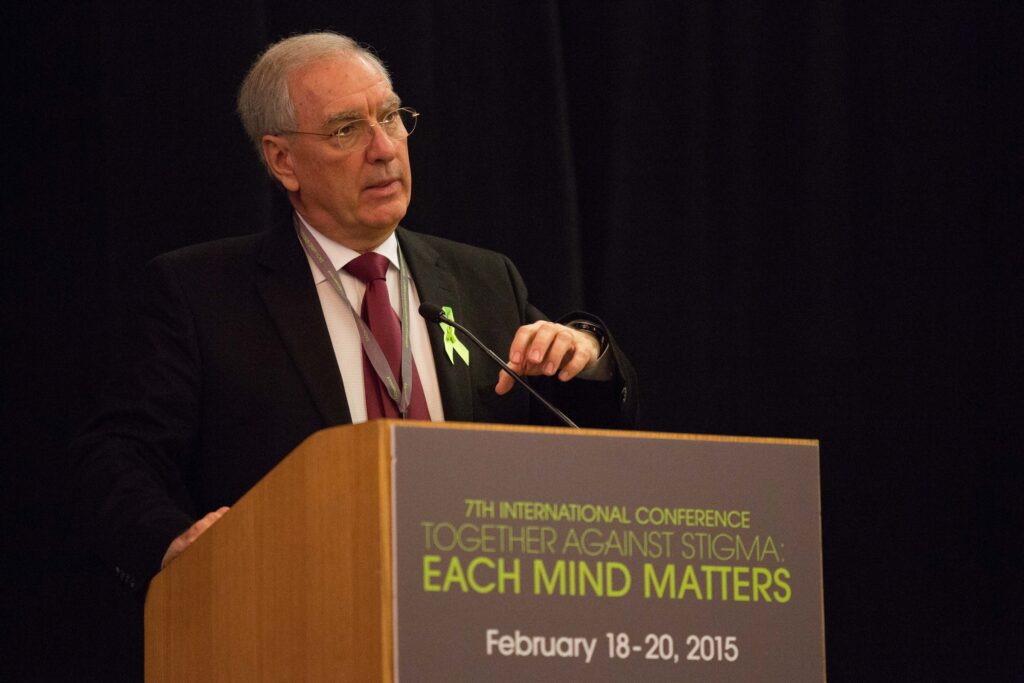 San Francisco — Micheal Pietrus, Director of MHCC’s Opening Minds, received the Innovator Award on behalf of the Mental Health Commission of Canada at the International Together Against Stigma Conference in San Francisco.

More than 850 people from all over the world attended the three-day gathering, participating in workshops and discussions surrounding mental health. (Photo by Don Feria/Associated Press for Each Mind Matters)

Ottawa, ON – The Mental Health Commission of Canada is honoured to have been recognized for its leading work as a global innovator at the Together Against Stigma International Conference in San Francisco.

The Innovator Award, one of five awards during the event, was presented to the MHCC for its anti-stigma work through Opening Minds. The award recognizes a “program which creates major impact through new approaches that inspire new possibilities and /or disrupt prevailing views.”

Opening Minds is the largest systematic effort in Canadian history focused on reducing stigma related to mental illness. Established by the MHCC in 2009, it seeks to change behaviours and attitudes toward people living with mental health problems or illnesses to ensure they are treated fairly and given the same opportunities as anyone else.

San Francisco — Delegates from Canada, the U.S., Denmark, Australia and England took part in a panel discussion about mental health and stigma at the International Together Against Stigma Conference in San Francisco. (from left) Panel facilitator Dr. Wayne Clark, MHCC’s Micheal Pietrus, Director of Opening Minds, Johanne Bratbo of Denmark, Andrew Thorp of Australia, Sue Baker of the U.K. and Paolo del Vecchio of the U.S. gather after closing remarks at the conference, on Friday, Feb. 20, 2015. (Photo by Don Feria/Associated Press for Each Mind Matters)

At the conference, MHCC representatives also presented at workshops to showcase several of the Commission’s programs including fighting stigma and improving mental health in the workplace. Michael Pietrus, Director of Opening Minds, also participated in a panel looking at global anti-stigma activities.

During this conference, leading world researchers, experts and advocates exchanged information to fight what a former U.S. Surgeon General called “the most formidable obstacle in the arena of mental illness and health.”

The conference played host to more than 700 people from 19 countries and was co-hosted by the World Psychiatric Association and California Mental Health Services Authority. This is the seventh Together Against Stigma symposium and the first time it has been hosted in the U.S. The event has also been held in London, Tokyo and Istanbul. The MHCC hosted the conference in Ottawa in 2012. Following that event it produced a major report entitled Together Against Stigma: Changing How We See Mental Illness.

One in five people in Canada will experience a mental health problems or illnesses each year, but because of the stigma associated with it, many won’t seek help for fear of being labeled as weak, unpredictable or even dangerous. While much has been done to make mental health care accessible around the globe, delegates agreed there is still more to do.

The Mental Health Commission of Canada is a catalyst for change, an organization designed to recommend improvements to the mental health system on a national level. We are not directly involved in individual cases of advocacy, outreach, service delivery or local supports.