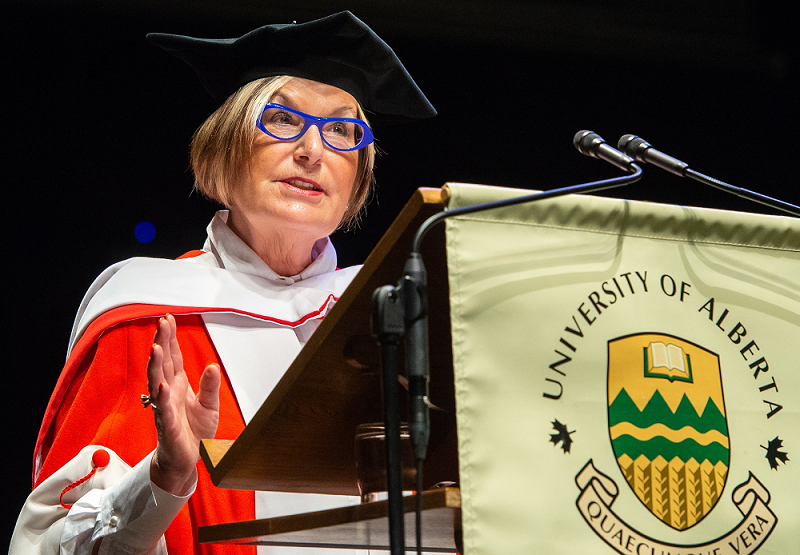 Louise Bradley, president and CEO of the Mental Health Commission of Canada (MHCC), was in a hotel room in Vancouver when she got an unexpected call.

“The last thing I was anticipating was to hear that I had been appointed as a member of the Order of Canada,” explained Bradley. “I asked the caller if I could take down her name and number so I’d have proof this really happened!” she laughed.

Indeed, it was really happening, and on July 27, Bradley and 83 fellow inductees were named to the nation’s highest civilian honour.

“Imagine,” reflected Bradley, shortly after the public announcement, “here I am, a person of very humble beginnings who was bounced around foster homes as a child, and told I wouldn’t amount to much, receiving this kind of recognition for my work. It’s both tremendously validating and incredibly humbling.”

While Bradley was bowled over by the news, the many friends and colleagues she has worked with over the years expressed confirmation that she has earned every ounce of this recognition.

“This is a tremendous honour and one that is much deserved,” wrote Carole Lambie, president and CEO of the Waypoint Centre for Mental Health Care, in her congratulatory letter to Bradley. “We look forward to your continued advocacy for improved funding for mental health across all levels of government and for making greater access an important priority for the mental health system.”

The MHCC’s board chair, Chuck Bruce, agrees. “I’ve known Louise since the commission’s inception in 2006, and I have watched her lead this organization with a clear-eyed focus on recovery-oriented care, a conviction for improving psychological safety in workplaces, and an unflagging commitment to raising the red flag about the suicide crisis in this country.”

Michel Rodrigue, MHCC vice-president of organizational performance and public affairs, notes that Bradley’s achievements aren’t motivated by what’s popular or expedient. “She doesn’t lead according to trends or bow to the flavour of the month. She’s truly compelled to act as someone who knows the mental health system inside and out, both as a senior leader and as a consumer of services.”

At heart, it’s Bradley’s courage in sharing her own lived experience, and her willingness to be a powerful, yet vulnerable voice in the space, that has injected her advocacy with credibility and resonance.

“About five years ago, I decided it was time to pull back the curtain,” she said. “I’d always spoken openly about my passion for mental health as a professional, but I’d drawn a line in the sand around my personal life. I realized if I was going to really be authentic, I needed to own my experiences.”

Bradley took her work in mental health, and coupled it with her own lived experience, weaving compelling narratives for audiences of health-care providers, CEOs, and even on the world stage at the OECD. Soon, she was disclosing the harrowing experiences of her early home life in Newfoundland, followed by the devastating suicide of her best friend while Bradley was in graduate school.

“Being this exposed was terrifying, to be honest. I’d always been very careful to present myself as this unruffled executive. But as I quickly discovered, no one wants to hear from someone they can’t relate to . . . and the fact is, everyone can relate to experiencing a mental health problem.”

Bruce agrees. “Louise truly leads by example. Her professional achievements are well documented. She’s got a growing list of accolades and honorary degrees. But these only tell part of the story. What they can’t illuminate is her kindness, her compassion, and her commitment to servant leadership. With all her accomplishments, Louise has never lost sight of her roots, and she is always willing to make herself vulnerable so others may draw strength.”

“And that,” concludes Rodrigue, “is why none of us were surprised when Louise got that call in Vancouver: there is no one more deserving. The MHCC family — our board directors, executive leadership, staff, and advisory members — could not be more proud.”