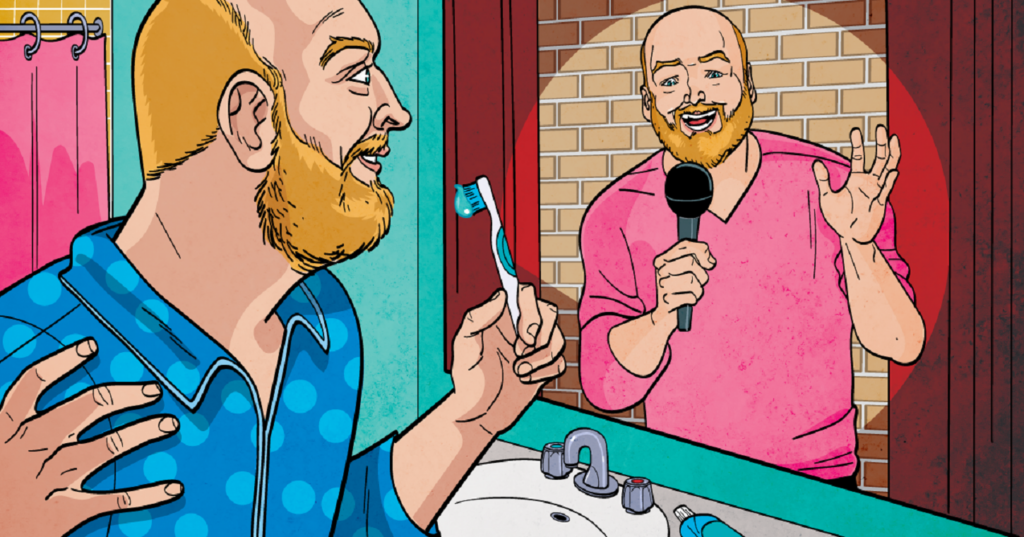 First, it’s best not to assume we know how that person feels and what they should do. I often say, “Don’t let anyone “should” on you today, and don’t “should” on yourself. So, let’s get away from our preconceived notions of what the person should do.
Read more

Phil Upshall, an influential mental health leader who was "ahead of his time", had a strong impact on many initiatives at the MHCC.
Read more

A critical piece of the puzzle

For Dr. Mary Bartram, policy director at the Mental Health Commission of Canada, gaining a better understanding of the realities of those who work in the field of mental health and substance use is key to unlocking improved mental health outcomes.
Read more

I reached Ian Morrison at his office at the Regina branch of the Canadian Mental Health Association (CMHA). A graduate of the Humber College comedy writing program, he teaches people how to harness their experiences — with mental illness and life in general — into stand-up comedy routines.

“It’s all I’ve ever wanted to do,” he said. “Just tell jokes, make people laugh.”

But 12 years ago, this dream seemed as distant as Hollywood itself. Morrison found himself at a Salvation Army shelter, off his medication and out of options. “Honestly, I thought my life was over. And it would have been if not for Phoenix [Residential Society].”

Here he paused. “I’m not trying to be dramatic,” he said, referencing his life’s passion. “But if it weren’t for Phoenix, I’d be dead. That’s simply the truth.”

From an early age, Morrison displayed symptoms of mental illness. While his obsessive-compulsive disorder (OCD), attention deficit disorder, and learning disabilities weren’t diagnosed until he was 16, he had long sensed that his thought patterns were different from others.

“What people don’t understand about OCD is that the thoughts are so intrusive and entirely out of character. And then you ruminate on them over and over. It becomes a vicious cycle. At the age of 28 I felt utterly defeated.”

Bankrupt with nowhere to live, Morrison was finally thrown a lifeline — and he’s never let go.

“We began with a handful of clients, perhaps nine,” said executive director Sheila Wignes-Paton, who’s been with the organization for more than 30 years. “I started on the front lines, helping people find their footing after experiencing homelessness or hospitalization for mental illness. Now we’ve got 190 people in the Phoenix family — which has expanded to include individuals with diverse needs, for example, those with acquired brain injuries.”

Wignes-Paton added that the organization’s success is not only rooted in recovery principles, which give clients the respect and self-determination to direct their own care, but also in an environment that nurtures and supports staff.

For Lynne Scott, a Phoenix staff member who works directly with residents, that kind of support translates into training to helps her manage the emotional strain of providing support to people in their “hour of need.”

“We’re taught how to set boundaries, refill our own emotional resources, and understand that we can’t pour from an empty cup,” said Scott, who has been with Phoenix for more than 15 years.

“Lynne’s tenure isn’t unusual,” said Wignes-Paton. “We’ve got a groove going here. We do this incredibly meaningful work, which is rewarding in and of itself. But we also place a tremendous value on our staff, and in doing so, reinforce the message that every person’s wellness reflects our overall health as an organization.”

For Scott, the recipe for success is simple — although that doesn’t mean it’s easy. “We meet people where they are, and we don’t sit in judgment. We stay curious, we ask questions, and often the results can be surprising.”

An open mind and an open heart

To illustrate how that works, Scott described her experience with a young man who arrived exhausted, in ragged clothes, and in need of a bath. “I thought to myself that we might need to begin with a focus on hygiene but waited to see how things played out.”

As it happened, the young man had been living in less-than-ideal conditions, without access to clean water. “Once a shower was available, he never needed prompting,” said Scott, who further recalled that initially he also overslept quite a bit, making him late for group therapy and other meetings.

“A trip to the doctor revealed a serious case of sleep apnea that was preventing a good night’s rest. When we got him treatment for that, he was perpetually on time.”

She has seen this kind of small transformation time and again. “I once had a resident who came in with matted hair and had been homeless for some time. I asked him if he’d like to go for a haircut. I didn’t have to ask twice.”

That same resident enjoyed his trip to the barbershop so much, he acquired a pair of clippers and began expressing himself through creative styles. “It’s spiky one day, and something else the next,” laughed Scott, who said she never fails to be surprised by what captures a resident’s imagination and the quiet joy of helping them to follow their interests.

The freedom to follow one’s interests was exactly the kind of support that led Morrison to where is he today. “I remember leaving the shelter and arriving at Phoenix, then having my case worker ask me what I’d like to do,” he said. At the time, living with depression and feeling devoid of prospects — yet thankful to be housed — Morrison’s reply was, “I guess I’ll just get another crappy job.”

He didn’t dare dream bigger, and he didn’t believe that something more meaningful could be on the horizon. “But I am forever grateful because she [his case worker] said to me, “I asked you what you wanted to do.”

Morrison said he quipped, “I want to do stand-up,” expecting a sarcastic response to his dearly held but long-abandoned wish.

A home, a job, and a friend

That approach to recovery, focusing on the agency of the individual, is the beating heart of Phoenix. Not only did Morrison wind up with a job at CMHA that fulfils his creative drive, he’s also able to help others find their comedic voices.

“I have a place to live — for as long as I want. I have a safety net that’s ready to step in and help when I need it. And I have people who can fill in the gaps that I may still struggle with.”

Morrison concedes that medication management can be a challenge. “I take 14 pills a day and get an injection every two weeks,” he explained, a regime that would challenge any of us. But Phoenix makes sure he doesn’t lose track. He also readily admits that his head for punchlines is a lot better than it is for bottom lines. So the financial guidance Phoenix provides is crucial for his continued independence.

“They helped me to put together a savings account,” Morrison said. “So suddenly, when my air conditioner broke, I had the funds to cover it.”

While this victory may seem modest, the Phoenix model is financially sound by any measure.

In 2018, the organization took a bird’s eye view of their federally funded Housing First program for persons who are chronically or periodically homeless. After tallying up the taxpayer dollars saved, based on 49 clients over four years, the numbers showed that their housing and attendant supports were far less costly to the public purse than repeated crisis interventions.

“We know Housing First works,” affirmed Michel Rodrigue, president and CEO of the Mental Health Commission of Canada, which was charged with rolling out the largest research demonstration project of its kind. “As an accountant by trade, I can see the value of the savings it brings. Yet my compassionate side knows that it’s impossible to put a price tag on the hope, dignity, and inclusion of a safe place to live.”

The economics are certainly sound. According to Phoenix, hospital stays alone were reduced by over $335,000. Spending for emergency room visits, notoriously costly — both in terms of financial and human resources — went down from over $500,000 to just $100,000. But the greatest decrease related to detox visits — which were slashed by about $1 million.

“Truth be told, we spend more time doing the work than toting up numbers,” admitted Wignes-Paton. Still, the results speak for themselves.

From clean housing and volunteer opportunities to group therapy and peer-support to financial guidance and medication management, Phoenix tailors its services to residents’ needs, so they receive personalized care that can be adjusted over time.

“People may think, ‘OK, recovery means you’re going to be exactly like you were before you got sick,’” explained Scott. “But that’s not necessarily the case. While Morrison has had tremendous success by any measure — doing meaningful work and making lives better daily — for another person recovery may look quite different.”

That’s one reason the Phoenix approach celebrates small victories, offers a safety net for (expected) setbacks, and above all, provides people who need it a place of their own.

“When I was in Saskatoon,” recalled Morrison, “I got kicked out of two boarding houses in one day, simply because I mentioned my medication left me tired. That feeling of being unwanted, unworthy, it stays with you. There are so many misconceptions about people living with mental illness. It’s frustrating and hurtful,” he said.

At six-foot-four and well over 200 pounds, Morrison gives the impression of being a gentle giant, wanting nothing more to live his days making people laugh and teaching them to laugh at themselves.

“Next to Phoenix, laughter is the best medicine. But I couldn’t have one without the other.”

The views and opinions expressed in this article are those of the author(s) and do not necessarily reflect the official policy of the Mental Health Commission of Canada.