A place free from judgement

I reached Ian Morrison at his office at the Regina branch of the Canadian Mental Health Association (CMHA). A graduate of the Humber College comedy writing program, he teaches people how to harness their experiences — with mental illness and life in general — into stand-up comedy routines. “It’s all I’ve ever wanted to do,” he said. “Just tell jokes, make people laugh.”
Read more

“I’m so glad you’re Black.” That’s the first thing Donna Richards hears from her new client. But as one of the few African, Caribbean, and Black (ACB) clinicians working in the client’s Employee Assistance Program (EAP) — and one of the few ACB psychotherapists in Canada — she hears it a lot.
Read more

As twenty Mental Health Commission of Canada (MHCC) staff members seated themselves in a circle in a small, windowless room, a sense of trepidation was in the air. While some had experience working with Indigenous communities, others were only faintly familiar with what it entailed. But everyone had heard that the KAIROS Blanket Exercise could be emotionally difficult.

“We’re here,” Vachon said, “not to place shame or guilt. We are here to lift the veil of denial and shed light on truth.”

The blanket exercise is as visceral as it is visual. Blankets are spread out on the floor to represent a map of North America. Participants take off their shoes before taking a place on the blankets — each representing a territory of the estimated 20 million Indigenous people who occupied this land before European contact. As land is taken, as disease spreads, as government policies targeted at assimilation gain momentum, participants are forced off their blankets and return to their seats — until what remains is a shadow of the once thriving civilization, diverse in language, culture, and customs.

The feeling of history echoing through the centuries was almost palpable. The exercise works so well because participants are more than attendees — they are both audience and storytellers. They become living embodiments of the traumatic past: the dead of the Métis uprising; Indigenous people who succumbed to starvation; children taken from their homes to endure residential schools or caught up in the 60s scoop; and missing and murdered Indigenous women and girls.

The most profound moment of the day came when Vachon asked participants to observe a moment of silence for those who endured these adversities. “Take a moment to sit in discomfort,” she said. “Move away from the habit of disconnecting from uncomfortable feelings.”

From that discomfort emerged a more positive discourse: the contemplation of those who survived unthinkable adversity — who sustained intergenerational trauma and experienced state-sanctioned racism — only to rise on the other side as living examples of strength, resiliency, and compassion, having reclaimed cultures and kinships against all odds.

“I realize I have only just begun to skim the surface of others’ experiences,” said Julia Armstrong, a program manager with the MHCC’s prevention and promotion team, one of many participants who expressed frustration at having been taught so little about Indigenous history.

She sees this new learning as a responsibility. “I’ve been given this gift of working for an organization that prioritizes reconciliation so staff can grow and learn as individuals. I want to pay that forward and share the wisdom I’ve gained with my circle of family, friends, and colleagues.”

And that is precisely the kind of change the facilitators hope to effect.

“People ask, ‘What can we do?’ They say, ‘Now that we know better, how can we do better?’” said Gordon. “To them I say this,” Vachon answered, “Don’t go out and do grand gestures — those feed the ego. Go out and do small acts. Talk to others. If each of you reached out and shared this new knowledge with one more person, and that person in turn did the same, think of what we could accomplish. We would chip away at the misunderstandings and the damaging stereotypes, leading us to a place free from judgment where compassion can flourish.” 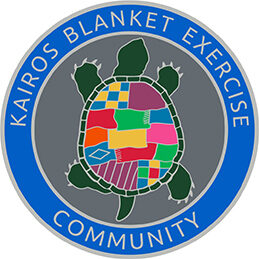 “The KAIROS Blanket Exercise is one piece of cultural competency I encourage everyone to experience,” said Louise Bradley, MHCC president and CEO. “As individuals, we have a responsibility to deepen our understanding of history and make meaningful steps in our personal journeys of reconciliation. As an organization, we are fortunate to be able to foster that growth in our staff. I have no doubt it will inform our work in many ways, big and small.”

If you would like to participate in this unique and participatory history lesson, you can learn more here.