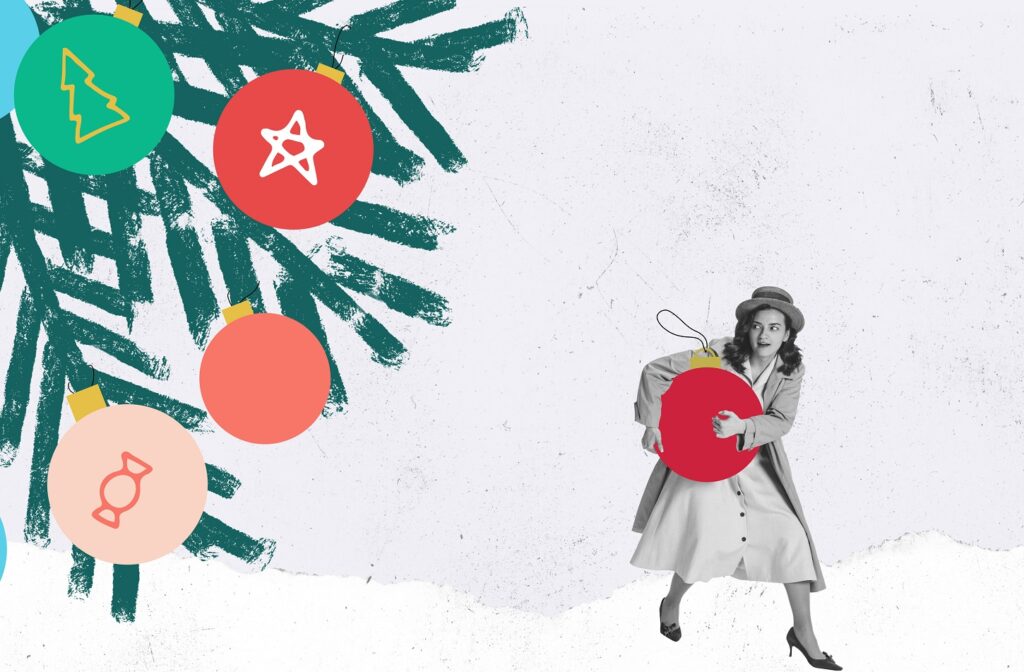 Figure-eighting through pain into possibility
Read more
By Moira Farr

This story is the second in the Mental Health for the Holidays series. While end-of-year celebrations can be a time of joy — they can also trigger feelings of stress and loss. Read the collection to learn how others were able to meet those challenges.

I often hear people say how much they hate New Year’s Eve. But I love it, for one simple reason: it’s not Christmas. The relief! On New Year’s Eve, you have options if you want to glam up for a glittering soiree to pop champagne corks, wear festive hats, and sway with strangers to Auld Lang Syne. If you’d rather stay home in your pajamas, binge-watch TV, and head to bed early, no one will judge you for it.

Christmas, though, is a different crock of mulled wine — the expectations are many, as are the possibilities for conflict and emotional pain. I wouldn’t say I anticipate it as I would a root canal, but a cleaning or small filling wouldn’t be far off. While it has to be done, as it’s happening, oh how I wish the slightly painful, tedious process was over.

Why, you ask? The truth is, I actually have many fond and happy memories of Christmas from childhood. I had secular parents who emphasized the holiday, not the religion. Yet there were always echoes of its “true meaning”: goodwill to all, peace on Earth, mercy mild, giving rather than receiving.

Adult life was where the difficulties began. One was being diagnosed with dysthymia (now called persistent depressive disorder or PDD) – its symptoms include low mood, hopelessness, worry, guilt, and a host of other challenges.

Then, when I was 21, my 58-year-old mother had a stroke, a catastrophic event she struggled with (having both physical and mental effects) for more than a decade until the day she died. When that happened, my sister and I worried about how our father would cope after 46 years of marriage. That first Christmas without her was tough on us all, but our normally reclusive and unemotional father was surprisingly (to us) resilient. While he cried one night after dinner — only the second time I’d ever seen him do so, besides the day after my mother died two months earlier — we gave each other what comfort we could and weathered the season, despite how heartbreaking it was and how unfestive we felt.

A week later, we managed to convince him to attend his politician neighbour’s annual New Year’s Day levee. Of course, he grumbled — it was probably the first time he’d been to such an event in decades — but to our surprise, he mingled gracefully. Every time I looked around, he was making small talk with a different cluster of people. “He’s working the room,” I remember telling my sister as we stood beside a potted plant away from the madding crowd. I know that at least one of the older people he spoke to had also recently lost a spouse. It was touching to see them talking.

At home later, when we remarked on how many people he’d managed to speak to, he let us in on his philosophy of party etiquette. “Get in and get out,” he said. A few minutes tops with each person, then move on. “No one wants to hear your life story.” He did have a point. 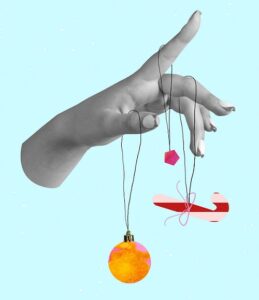 When you live with a mood disorder, especially PDD, what should make you happy – or at least cheerful – can have the opposite effect. Years of living with it and successful treatment (for which I’m grateful) have given me insight, coping tools, and perspective. I know what will pull me down — so I avoid malls, pass on Christmas movies, mute Christmas TV ads, plan realistically, and pace myself when it comes to socializing.

But you can’t avoid everything. An old carol on the radio as I’m anxiously wrapping gifts I hope someone will like can send me into a tailspin of brooding about all that’s wrong with the season and the world. People like me are the Eeyores and Charlie Browns of the world (Charles M. Schulz suffered from depression) — we’ll find the worm in the apple, or the mince tart, just give us time. We can’t help dwelling on the fact that most people don’t live in a Norman Rockwell painting. We think of those without family or those with families so complicated that the stresses of holiday planning are hard to justify. This year in particular, lots of people will be struggling with holiday expenses. And let’s not forget all those who don’t celebrate Christmas, and how they must endure a world awash in red and green and ho-ho-hoing Santas for two months after Halloween. Millions of turkeys raised for mass slaughter, what fun the season is for them. And mountains of shiny unrecyclable wrapping paper clogging up landfills.

You can see where PDD takes me. Nowhere good.

I take deep breaths and remind myself that, while fleeting feelings of sadness are not unhealthy, mulling endlessly on the world’s ills won’t change them. Appreciating your good fortune is one thing, but feeling guilt over having enough to eat, a loving family and friends, and a warm place to live, will not help those who don’t have them. Comfort and joy don’t just happen. You have to create them, and that requires generosity of spirit (as Scrooge famously learned) instead of going so far inward you can’t see beyond your own navel.

Ironically, I now share my life with someone who loves Christmas. He doesn’t build Christmas villages, bake fancy cakes and cookies months in advance, or wear ugly home-knitted sweaters. But he owns a sizable tree-ornament collection, insists on a live tree, and hangs garlands of outdoor lights without fail — humming tunes and thinking of his adult children and grandchildren as he does so.

We have turned my aversion to Christmas into a shared joke. Randomly, we’ll sing Holly Jolly Christmas to each other with great enthusiasm while pretending to sob uncontrollably. Maybe you have to be there to appreciate the dark humour, but trust me, it turns my tears into laughter and lifts me out of the dumps every time.

Another depressive friend copes by focusing on the pagan origins of Christmas — the lit tree, a hopeful sign of life in the dark winter, keeping evil spirits away. All the greenery decking the halls are laden with symbolism: the wreath is a circle of life; mistletoe, a tribute to love and reconciliation.

I’m sure my father didn’t always love Christmas after my mother died. He lived another 13 years, grieving with quiet dignity and moving on to a life of his own, which I believe he enjoyed. When he was diagnosed with lung cancer at age 86, we scrambled to make sure he wasn’t alone. We had a modest Christmas together, accommodating his fatigue from radiation treatments and the cancer itself. He had little appetite and mostly slept. While we didn’t know he would die just six weeks later, we knew it would likely be our last Christmas with him.

After his death, as we cleared out his house, I found several Christmas gifts with my name on them under his bed. Obviously, he’d forgotten to put them under the tree. One was a silver pen carved in a swirling Celtic pattern. Of course, it caused heartache, but I will always treasure it. More than that, I treasure the thought of my father going out, despite the ravages of cancer, and shopping for thoughtful gifts to give his daughters.

Comfort and joy. He tried right to the end to provide them. I often remind myself of that. If he could do it, so can I.

Author: Moira Farr, is the author of After Daniel: A Suicide Survivor’s Tale. She teaches in the journalism programs at Carleton University and Algonquin College in Ottawa.
More resources to support your well-being over the holidays:
How to Give Back (or Reach Out) This Holiday Season (Mental Health Commission of Canada)
Five Ways to Protect Your Mental Health This Holiday
(Canadian Mental Health Association)
The views and opinions expressed in this article are those of the author(s) and do not necessarily reflect the official policy of the Mental Health Commission of Canada.