Navigating the transition from full house to empty nest

One of the main ironies of parenting is that your job is to make yourself irrelevant. Babies are born, children are nurtured and grow up, and then one day — eventually — most are independent enough to move out of the family home.

At least that was a typical trajectory in Canada. These days, the transition isn’t always so linear. Economic challenges such as the high cost of housing and precarious employment, as well as socio-demographic shifts like the need for more post-secondary education, mean so-called “boomerang” kids leave and then return, sometimes repeatedly.

For the parents who are left behind, whether temporarily or forever, this passage into the next phase of life can be difficult to navigate. Yet, as a parent, it also represents an opportunity to renew relationships with yourself, your partner, your friends, and your family, including the child or children who are making the leap into their adult lives.

My wife and I are on the cusp of this change: Our twin daughters will be starting university this fall. To help prepare for this double departure, Lisa and I are spending a lot of time talking to friends, neighbours, and colleagues whose children have already left or are about to leave home.

One friend told us that her kids moving out changed her life more profoundly than when they were born. Another, whose father-in-law moved in after his daughters went to university, talked about the sense of flux in his household, with caring for aging parents also affecting the configuration of his nest. My own mother cautioned me that our house might feel like a train station for a while: you won’t know who’s coming or going, or how long they’ll stay.

Next station
Although the range of reactions and circumstances varies greatly, as a whole what people told us reflects research findings and advice from mental health professionals. For Simon Fraser University gerontology and sociology professor Barbara Mitchell, the “stereotype of the empty nest syndrome has largely been debunked as a cultural myth.” She takes a matter-of-fact view of this and other major changes in life. That is, to approach the empty nest phase as one of many junctions in a fluid existence while staying mindful and ready for whatever might follow. 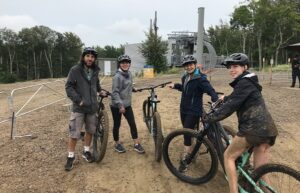 Mountain biking in Charlevoix, Quebec: The author with Daisy, Lisa Gregoire, and Maggie. Transitioning from full house to empty nest is an opportunity to renew relationships with yourself, your partner, your friends, and your family, including the children who are making the leap into their adult lives

“Most parents actually find it to be a positive experience,” Mitchell says. “They’ve done their job and are now free from day-to-day responsibilities. They’ve established roots for their children — and wings — so they can become autonomous adults.”

Despite that general trend, if rooted in a traditional mom-as-homemaker role, some women feel a strong sense of loss when the kids leave, as of course do some men. While this sadness and disorientation (commonly called “empty nest syndrome”) are often short-term, she points out that about 20 per cent of parents struggle with it, and in extreme cases it can require intervention.

Mitchell, who has been researching family transitions since she was a graduate student in the mid-1980s and is perhaps the only academic in Canada with this expertise, notes that the empty nest is a relatively recent phenomenon in North America. Historically, at least one child regularly stayed with aging parents, especially in rural areas. But as our population became more urban, as life expectancies rose, and as the affluent middle class boomed after the Second World War, mothers and fathers increasingly found themselves alone in their later years.

Of course, parents from what she describes as “collectivist cultural groups” often have entirely different experiences, such as remaining within a multi-generational household or viewing the departure of a child for education or marriage as a sign of success. “The context of the family environment is important,” says Mitchell. “There are many potential complexities.”

Among these complexities are compounding stressors like health issues or retirement, which can exacerbate negative emotions.

Mental health and wellness in Canada is in fact influenced by numerous factors, including life experience, workplace, and family environments, and social and economic conditions that fundamentally impact our well-being.

Edmonton psychologist Loriann Quinlan, who specializes in treating adults with anxiety and has helped clients with empty nest syndrome and other life transitions, knows that every individual and family experiences this change differently. And since it can be accompanied by a range of emotions, from sadness and grief to excitement and joy, she advises clients to approach the process without judgment, to sit with any discomfort, and to engage in self-care.

Taking the time to become better acquainted with yourself, your partner, and others in your circle can be healthy, she says, because as parents we invest a tremendous amount of time and energy into relationships with our children. No wonder we’re knocked adrift and feel empty when such a critical part of our identity — for so many years — is no longer clearly defined.

As parents, we invest a tremendous amount of time and energy into relationships with our children. No wonder we’re knocked adrift and feel empty when such a critical part of our identity — for so many years — is no longer clearly defined. —

Making the shift
This transition also offers a chance to appreciate the perspectives of the young adults who are leaving and taking steps toward independence.

“It’s an amazing opportunity for parents and kids to see each other through a new lens,” Quinlan says, “and to shift the dynamic and hopefully connect on a deeper level.”

To get there, she recommends keeping the lines of communication open. Talking about thoughts and fears helps us understand where other people are coming from. Not shying away from conversations about well-being also helps us know when it’s time to reach out for support. That could simply be a chat with a friend or connecting with a more formal mental health resource.

While the internet is making that access a little easier, rapidly advancing communication technologies and other recent phenomena, such as the pandemic and the tight housing market, are also influencing how parents deal with the departure of their children, notes Mitchell, who wants to do more research on the impact of these “overlapping factors.”

On one hand, young adults are stepping into an increasingly uncertain world; on the other, you can make a video call with them no matter where they are. At least in theory.

My friend Eleanor Fast, who will be seeing her younger son off to university when my girls leave next fall, confesses to “stalking” her older son online while he’s been away at college in the U.S. for the past two years. He doesn’t always respond to her texts, and it can be difficult to schedule video calls, so she checks his Instagram feed — “for proof of life” — and looks to see if he’s posted any recent running routes on the exercise app Strava.

“The world may be more difficult than it was when I was 18 and left home,” says Fast, “but kids still need to get out there. They’ve been isolated for the past couple years because of the pandemic and have missed a lot of living.”

COVID was Fast’s biggest concern when her son left home — she was worried he would be lonely doing online classes while confined to a dorm room — but turns out he was fine. And although she and her husband truly enjoyed having a full house, they found it really nice when there was just one kid to focus on. They’re already planning activities they can do as a couple, such as taking long-distance bicycle trips together.

“I love my kids and love being with them,” says Fast, “but I want them to have their own lives, and making plans for the future helps counteract the sadness of them leaving.”

That sums up the mindset Lisa and I have as we reflect on the past and prepare for our next chapter. One of our daughters will be moving several provinces away in a couple months, and even though the other will be going to university in the city where we live, and recently decided to stay at home instead of residence in first year, we’re conscious of the fact that this is simply a new rhythm to experience.

Our children are no longer children. They — and we — are both excited and nervous about the journey ahead. And like many times over the past 18 years, we can learn a lot from them.

Author: Dan Rubinstein is the author of Born to Walk: The Transformative Power of a Pedestrian Act and contributes to The Walrus and the Globe and Mail.
Photo main: Maggie Rubinstein riding behind her sister Daisy Rubinstein on their parents’ tandem bike, which they received as a wedding gift 20 years ago.
The views and opinions expressed in this article are those of the author(s) and do not necessarily reflect the official policy of the Mental Health Commission of Canada.