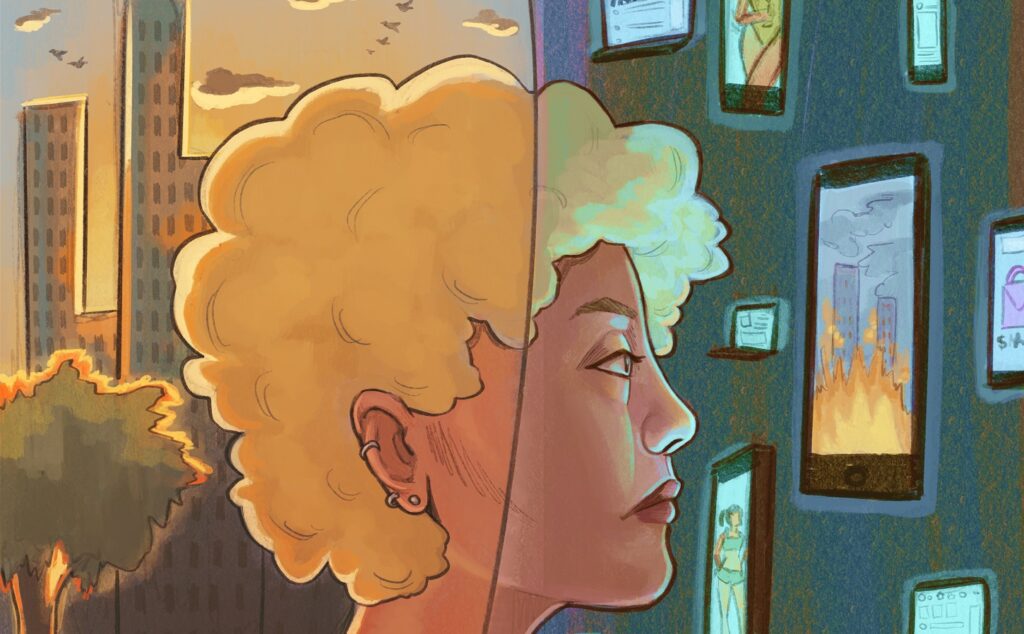 When Dr. Patricia Lingley Pottie was about to graduate high school on Nova Scotia’s south shore in the early eighties, she was given the results of a new computerized aptitude test — which she calls a “very primitive precursor to today’s artificial intelligence, albeit a pioneer in its day.”
Read more

While Digital Health Week was a celebration of the advantages of connected care — from virtual consultations to e-health records to useful apps — it was also an opportunity to reflect on how we maintain our best mental wellness in an increasingly digitized world.

“There’s no doubt that the pandemic has increased our reliance on virtual connectivity and social media,” affirmed Dr. Keith Dobson, professor of clinical psychology at the University of Calgary. “And while there are some positives associated with our capacity to remain plugged in to our relationships, we can’t be blind to the very real pitfalls.” —

Those pitfalls are having an especially adverse effect on the mental health and wellness of young people — especially young girls.

“Our brains tend to believe what we can see,” Dobson said. “While intellectually, we might comprehend that a photo is doctored, that an image has been filtered or retouched — a waist nipped in, eyes made bigger — our brain doesn’t readily make that distinction.”

Seeing is believing
Dobson explained that the primacy of our sense of sight is largely why we as a society are so enamoured with digital platforms like Instagram that offer powerful visual stimulants. We’re also reeled in by the hit of dopamine, the feel-good hormone that kicks in when we’re using a medium that offers us easy wins. Likes, hearts, shares, and comments give us bite-sized endorphin rushes, without requiring much in the way of effort.

“Normally, we get a sense of well-being from an accomplishment,” he added. “Something that has required us to invest meaningful time, energy, and effort. Instead, social media provides us with a short-cut. But it’s one that comes at a high cost. The industry we’re up against is a formidable foe — one that has invested billions to buy access to our innermost thoughts and most intimate insecurities.”

Ironically, Dobson noted, we don’t need to feel good while we’re actively engaging on social media. That activity might make us feel less-than, unattractive, not-good-enough. But interestingly, when we shut down our phones, we start to feel good again.

The ‘negative feedback’ loop
“It’s called a negative feedback loop,” he said. “Think of it like this: you have a negative thought — ‘I’ve left the stove on,’ for example. Then you need to check the stove to make sure it’s off. After you find relief in checking, the pattern begins again.”

Holly Craib, a 21-year-old art student in Ottawa, agreed. “I don’t even consciously decide to check my social media. In a moment of boredom, quietness, or loneliness, I just automatically reach for my phone and start scrolling.” She describes the frustration of an hour or two slipping by, checking Twitter or “doom scrolling,” pulling herself up short when she realizes she’s making herself insecure by comparing her accomplishments to those she’s seeing on her feeds.

Dobson echoed Craib’s assessment, explaining that there are myriad things that pull us toward social media. We may fear we’re missing out. Then there’s the pull of social currency: wanting to be sure we can contribute to a conversation about a particular social media event, personality, or meme.

But things can take a dangerous turn when our insecurities are being mined as precious data by organizations seeking to profit from our distress. Eating disorders have increased during the pandemic, and researchers are connecting the link between being in lockdown and having constant access to tempting content that reinforces negative thoughts and damaging behaviours. 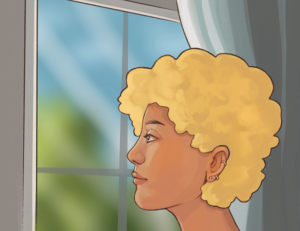 A love-hate relationship
“It’s a vicious cycle,” said Craib. “I think like a lot of people my age, I have a love-hate relationship with my phone. I’ll often see friends posting the equivalent of ‘you’ll have to reach me on my landline’ because they are taking a breather from all the noise on social media.”

Once you’ve shown an interest a certain kind of content, algorithms designed to snag your attention quickly respond with reinforcing information. Suddenly, a single search like “How to lose five pounds” becomes a tsunami of diet content. If you weren’t convinced you needed to slim down before that innocuous search, you’re suddenly inundated with the message that you absolutely do.

“And therein lies the danger of being a passive consumer,” said Dobson. “I realize that the tools we have in our arsenal are relatively weak against a billion dollar behemoth that lives in our pocket and seemingly reads our minds, but that’s why we’ve got to be doubly savvy.”

Coming to grips with virtual reality
If you grew up with Seventeen magazine, for example, which you could read and put aside, it may be hard to conceive just how ubiquitous social media’s influence has become. It’s not just the latest trends, funny jokes, and a way to stay in touch with grandma. It’s the whole world in the palm of your hand — and for a lot of young people it becomes their validation, their connection, and their biggest detractor.

Craib said cutting herself off from her phone would be like cutting a lifeline, especially during COVID. “Virtual connection has been part of my life since I was logging on to MSN Messenger when I was in elementary school. I got my Facebook account when I was 13. I don’t know how not to connect with people this way. But I also understand it’s playing on my vulnerabilities, and that’s a fine line to walk.”

Dobson advocates education as the most powerful tool we have — especially for parents of young people. He urges parents to learn about social media and to openly discuss the content their children are seeking, teaching them from an early age how to be critical consumers. “Having them ask, ‘What is the purpose of this image?’ And then, ‘How does it make me feel?’ gives them an opportunity to see if their thoughts are being distorted by unhealthy, unrealistic standards of beauty or accomplishment, for example.”

He also advocates clear boundaries that, he readily admits, won’t necessarily be easy to enforce.

“Some obvious ones for me are no phones in the bedroom, time-limited access to phones and computers, and pursuing other activities that give you an endorphin rush that’s earned without strings attached.”

Learning an instrument, exercising, going for a walk, or having a meaningful conversation with a close friend are social media alternatives that give our brain a feel-good boost, without the inevitable crash.

But for Craib, the work she does as an artist keeps her tethered to the platform she finds most problematic. “Instagram is a natural place to showcase my art, which I love making. But it’s also a forum where you can start to feel unseen, drowned out, or less prolific. I suppose in that way it’s a bit like having a frenemy. On the one hand, you’re able to put yourself out into the world. And, on the other, the world is there to respond.”

Taming the beast
But for April Yorke, there are ways to tame the beast. During her time as the Mental Health Commission of Canada’s manager of digital marketing, she has mastered the skill of making social media work for her, rather than the other way around. And she’s quick to point out that using the platforms can also have positive mental health benefits.

“One of the best things about social media is that it lets you home in on your interests. If you love puppies, fly fishing, and knitting, you can bet you are going to see puppies and fly fishing and knitting, morning till night.”

But if you sense that the algorithm has turned against you (when #HowToLoseFivePounds is all the content you see), Yorke recommends turning the algorithm to your advantage. “Start searching for what makes you happy. When you find it, make sure you like, follow, subscribe, and comment — any action you can take to engage with it. It won’t take long for the algorithm to pick up on where your new interests lie and start pushing you in that direction.”

And if you are still seeing something you don’t like? “Report it. Block the account. Social media gives you those options because they don’t want to show you stuff you don’t want to see and eventually lose you as a customer. Complete the feedback loop by also making it clear what you don’t want.”

Craib is also a proponent of this approach. “I’ve given Twitter a list of words or phrases or subjects a mile long that I am not interested in reading about ad nauseam. It’s not perfect, but it’s a step in the right direction.”

Dialing it back
If those two options aren’t enough, Yorke has another idea. “Act like a feuding celebrity and take yourself back to zero. Unfollow absolutely everyone you are currently following. Remove your own posts and photos that you no longer wish to see.”

Yorke has a friend who took a multi-year break from social media. When he made his return, he used only one network and carefully curated who he was following.

“Now,” said Yorke, “using social media makes him feel inspired in a way that it never did before.”

It’s not usual to see articles recommending strategic avoidance or deleting apps altogether. While that may be the right move for some — it’s not really an option for social media managers or people like Craib, who are required to leverage the connectivity of social media to showcase their work or run a business.

But as Yorke said, “Once you winnow down your list of follows, it doesn’t take as long to ‘get caught up’ (whatever that means), so you spend less time on the app. Now I mostly see my close friends and ads for travel bags with lots of pockets — an important reminder that a big wide world beyond the screen is out there.”

First, it’s best not to assume we know how that person feels and what they should do. I often say, “Don’t let anyone “should” on you today, and don’t “should” on yourself. So, let’s get away from our preconceived notions of what the person should do.