While Digital Health Week was a celebration of the advantages of connected care — from virtual consultations to e-health records to useful apps — it was also an opportunity to reflect on how we maintain our best mental wellness in an increasingly digitized world.
Read more

When Dr. Patricia Lingley Pottie was about to graduate high school on Nova Scotia’s south shore in the early eighties, she was given the results of a new computerized aptitude test — which she calls a “very primitive precursor to today’s artificial intelligence, albeit a pioneer in its day.”
Read more

If you’re fortunate enough to visit Sydney in September, you might notice something odd: a whole lot of mullets.

That’s because each year, the Black Dog Institute (BDI) runs their Mullets for Mental Health campaign, where Australians are encouraged to grow their hair in the much-maligned style leading up to the fundraising period. Top earners — those whose business-in-the-front, party-in-the-back haircut brings in the most money — can also take home rewards — including the coveted mullet-wig hat.

The mullet offers an easy opening to raise awareness and funds for mental health research, much like Canada’s Movember moustache campaign does for men’s mental and physical health.

For Helen Christensen, who was BDI’s director for nearly a decade, campaigns like this are doubly beneficial. “We’ve built up a reputation within the community,” she said. “People are more likely to get involved because they know who we are, and our organization is more sustainable as a result.”

The Black Dog Institute — named for the way Winston Churchill once described his depression as “my black dog” — is Australia’s only medical research institute to investigate mental health across the lifespan. Before Christensen joined BDI in 2012, it was already doing innovative work, mainly studies on treatment-resistant depression while educating clinicians and other researchers about those findings, although it was relatively unknown outside the psychiatric community.

Using her background in population-based research, Christensen helped bring this work out of the hospitals and into the community. Those efforts included a strategic shift to internet-based, technology-driven, broader-scale community and longitudinal research. Rather than focusing on clinicians, BDI began offering education in schools and management training for workplaces.

While research is foundational to the “business” part of BDI’s work, their community events are now what drive it forward. That’s the “party in the back” part.

Community-based campaigns put the fun into fundraising while reminding Australians that no one is immune to mental illness. They are built around activities that encourage togetherness, like races, obstacle courses, and other ideas from community members.

Leading with lived experience
Yet BDI is equally committed to integrating the experiences of people with lived and living experience (PWLLE). Describing the growth of this area of expertise, Christensen explained that it started as an open call advisory group (much like the Hallway Group and Youth Council at the Mental Health Commission of Canada) but then evolved into a dedicated branch of the institute. 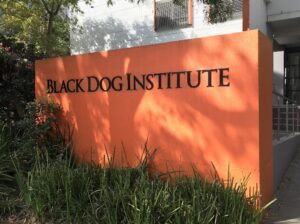 “We embraced lived experience early on but also recognized that it needed to be structured in terms of how that expertise was incorporated into the rest of the organizational activities,” she said. “It needed its own framework and processes, its own staff, its own network, and its own volunteers. Some of the framework is still emerging, but it’s the people with lived experience themselves who lead that process.”

Likewise, PWLLE among Australia’s Indigenous populations is integrated into the institute. Through their lived experience Indigenous centre, BDI helps with things like research and project management. But as Christensen emphasized, “doing this kind of work isn’t as simple as saying, ‘We want to do Indigenous mental health, let’s set it up.’”

“You’re the host for that organization or movement, you’re not the driver of it, and you’re not doing it for them,” she said. “If you’re lucky enough to be a respected organization that they trust and can fit their work with, then you can help — but first you have to be invited.” As this focused approach has evolved, Indigenous partners have become a cornerstone of the institute.

Prevention and progress
While Christensen stepped down as BDI’s director in 2021, she remains deeply committed to improving mental health — and saving lives — across Australia. She continues to challenge the status quo with a special emphasis on suicide prevention in her current positions as professor of mental health at the University of New South Wales and non-executive director on the BDI board.

Suicide prevention is nothing new for BDI, which offers a rich collection of research and resources in the field. But according to Christensen, a critical piece of the puzzle is still missing: data.

“It’s like trying to work blindfolded. There’s a lot of misinformation and catastrophizing in the absence of real data,” she said, adding that accurate statistics around self-harm and suicide attempts simply don’t exist.

In one example, Christensen relayed the story of a student who took an excess of pills in an attempted overdose. “She awoke in the morning and was physically OK, so she just got dressed and went to university like nothing had happened. That attempt wasn’t tracked anywhere. How often is this happening? We don’t know.”

To help close these data gaps, she believes in the value learning from other sectors. “Car dealerships have all kinds of data to improve business. Banking apps use metrics to see exactly which investments are paying off and which are not. Why can’t we have the same thing to improve the ‘business’ of suicide prevention?”

Leveraging digital tools
When COVID-19 forced people indoors, health care of all kinds shifted to virtual services, including mental health. Today, BDI continues to champion evidence-based digital mental health tools and resources and to investigate the effectiveness of apps. At the same time, Australians can request free counselling, peer support, and other telehealth services through the institute.

While the influx of digital health tools has made treatment options more accessible for many, as Christensen pointed out, it’s not a panacea. “The stand-alone services we can now offer virtually haven’t been integrated into our broader health system,” she explained. “Without an integrated health record that can report back to the care provider, there’s no way to confirm if people actually got better following treatment. That’s a major problem.”

For Christensen, this digital shift brings an unprecedented opportunity to overhaul what is often a disjointed system. “What I would like to see is integration — a model of care that includes digital health, and a technology platform that can deliver it. Only then will we see a true collaborative, patient-centred model of care.”

Despite current limitations in data and access to care, Christensen remains hopeful that digital tools and data collection have great potential, particularly for suicide prevention. “If we think about cancer and infectious disease, there’s been amazing changes over 40 years in how people are treated. Suicide prevention, on the other hand, is still a new field.”

“With better data to improve outcomes, more capacity to provide integrated care, and a focus on the social determinants of health, I believe we can really turn up the dial on mental health.”