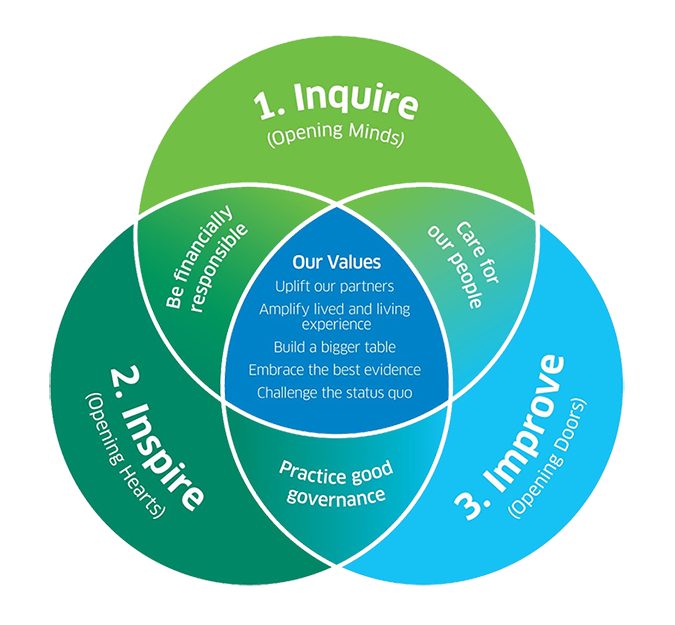 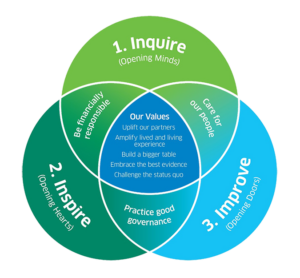 For Chuck Bruce, board chair of the Mental Health Commission of Canada (MHCC), the need to invest in mental health isn’t a question — it’s an imperative.

“I’ve worked with tangible investments my whole career,” said Bruce from his home office in Newfoundland and Labrador, where he runs the province’s largest public sector pension fund. “I typically see a return in terms of dollars and cents — but you can’t put a price on mental wellness.”

That’s why Bruce, together with the MHCC’s board of directors, set out to draft a blueprint that could help renovate a mental health system with dangerous gaps and cracks still running through its foundation.

Building on past successes
“Answering the Call isn’t prescriptive,” he said, referring to the MHCC’s freshly released 10-year strategic plan. “It’s a bold, ambitious vision to uplift the voices of lived experience, enhance co-operation across our many partnerships, and dig into those areas that have been overlooked far too long. We cannot afford to stall the progress on mental health promotion, mental illness prevention, and supports and treatments just as we are hitting our stride as an organization.”

The new plan is supported by three pillars: Inquire, Inspire, and Improve. For Bruce, “they are the lifeblood of what we do at the MHCC: We open minds by seeking out the best research and disseminating it. We open hearts by combating stigma in all its forms — including structural barriers (that are as invisible as they are dangerous). And we open doors with improved access to services through cutting edge demonstration projects.”

The right frame for growth
“As a board, our job isn’t to tell the experts who make up the MHCC’s leadership and staff how to go about creating this change. For the same reason, I wouldn’t tell a builder where I wanted load-bearing walls or how to engineer my bathroom. Instead, I might say, I want an open concept home with lots of light.”

In the new plan, the MHCC’s board has left plenty of room for the creativity, responsiveness, and entrepreneurship that have been a hallmark of the organization’s first decade.

“When I first became acquainted with the MHCC, on their workplace advisory committee, my knowledge of the organization’s footprint was reasonably narrow,” said Bruce. “Many years later, I’ve come to realize that, while we’re a relatively small group, we’re spotting and plugging holes at every turn. From community-based suicide prevention to creating mentally healthier university and college campuses or delivering resiliency and anti-stigma training, we make use of every last funding dime to create the kind of society that reflects our shared ideals — recovery chief among them.”

The road ahead
When asked what success might look like for the 10-year plan, Bruce paused. “I don’t want to predict where this plan will lead us because I believe in the power of compound knowledge.”

The idea is built on the investment principle that dollars increase over time through the strength of compound growth. “It’s the most powerful tool we have to create wealth,” he said. “And reinvesting in the knowledge we gain is the most powerful means to create transformational change.”

For Bruce, that change is within our grasp — and always has been.

“When my mother was diagnosed with breast cancer 25 years ago, my father didn’t want it discussed. It was family business, and it was private. Period.”

On reflection, Bruce suspects that shame played a role in his father’s perception of breast cancer. “And he wasn’t alone in that. But over the years, we’ve seen the Run for the Cure gain momentum and grow, we’ve seen the CN Tower light up pink, we’ve seen speciality appliances and lipsticks with a portion of proceeds going to breast cancer research. And the implicit message in all of this is that there is no shame. I’d say it has worked for many health issues, but we aren’t there yet when it comes to mental illness.”

Measuring progress
If the MHCC’s strategic plan is successful, Bruce said, there will be similar markers along the way.

“We’ve got to celebrate the victories. The e-mental health interventions that hurdle geographic barriers. The standards that are changing how we study and work. The Mental Health First Aid program that’s trained more than 500,000 people in Canada (and counting). Each of these is narrowing a gap or filling a crack. Building a solid foundation.”

And until that work is done, Bruce is convinced that by reinvesting our knowledge to open minds, hearts, and doors, there will be a marked net profit.

“I’m a numbers guy, after all,” he conceded. “We’ll be measuring our returns and reporting on progress to our key investors — and that’s every single person living in this country. Because mental health . . . matters to all of us.”