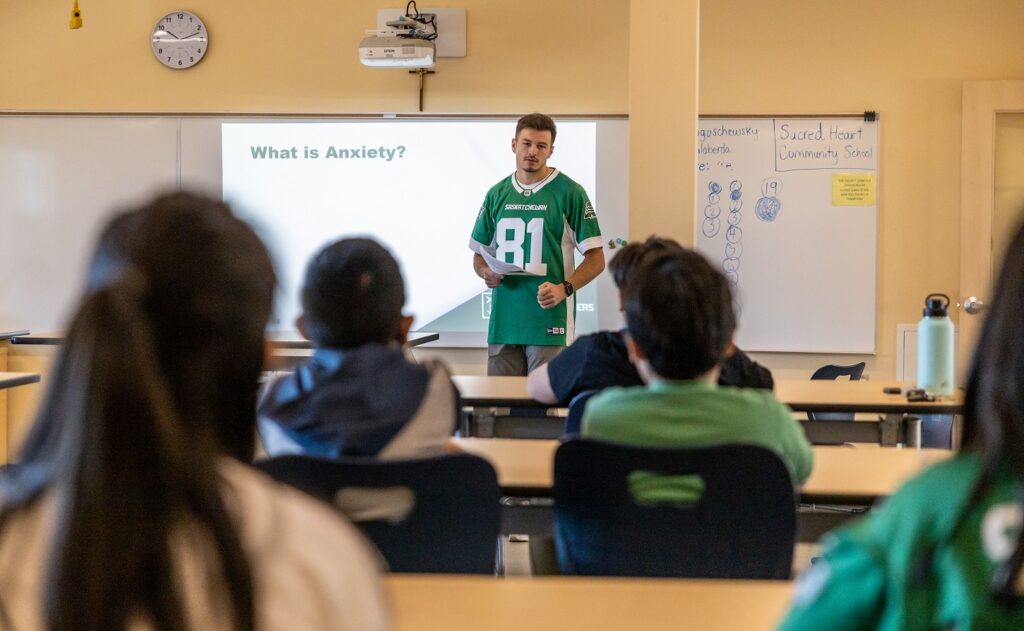 The world of professional sports brings to mind scenes of packed stadiums, screaming fans, and lavish contracts for the most celebrated athletes, who display dazzling feats of skill and endurance. But this image of players fulfilling a life’s dream doesn’t always square with reality: the challenges many of them face in maintaining their mental well-being. The truth is, many elite athletes are struggling. Ahead of the 109th Grey Cup, The Catalyst looks at the way organizations like the Saskatchewan Roughriders are joining with others to tackle the issue.

According to a recent study in Psychology of Sport and Exercise, more than 40 per cent of 186 elite national team athletes in Canada “met the cut-off criteria for one or more mental disorders,” with stress and training load being “significant predictors of depression and anxiety.” To understand why, it’s important to acknowledge the realities athletes run into, both on and off the field.

Before reaching professional or top amateur levels, competitors must prove their skills in junior, university, and semi-professional leagues. This often means having to balance their sports aspirations with school, work, and family obligations, not to mention the growing public profile that comes with each success.

“It can be a grind at times,” said Ty Logan, a former university athlete and current professional defenceman with the Albany FireWolves of the National Lacrosse League. “When you’re in school, your weekends are spent travelling on a packed bus between cities, while trying to finish assignments and catching up on the lectures you missed during the week. It’s late nights in the library followed by early mornings at the gym. If you’re not careful with your time, it’s easy to fall behind in one way or another.”

Only as good as your last game
The expectation to perform in the midst of multiple obstacles and responsibilities can be a huge source of stress for young athletes. “You definitely feel the pressure from both sides,” Logan said. “Even when you turn professional, there are no days off, and you never know when it might be your last contract or last game in the league. You have to try to block out the outside world and focus on playing your best.” 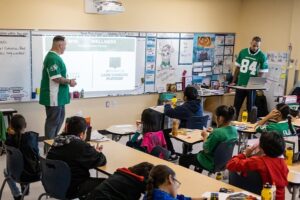 This pressure intensifies for emerging athletes with the increasingly slim chances of becoming a professional in any given sport. According to the National Collegiate Athletic Association, around four per cent of all college athletes will reach a professional league or the Olympic level. Even fewer will stay there for more than a handful of games.

When you have a large group of highly motivated, competitive athletes battling for a finite number of spots, with the promise of fortune and fame on the line, it’s easy to see how the pressure can mount for aspiring professional athletes. Add in the need to maintain grades and a part-time job to help pay the bills, and the risk to one’s mental well-being becomes just as clear.

Knowing this, the Mental Health Commission of Canada (MHCC) adapted The Working Mind (TWM) training program to address these issues. TWM Sports modules focus on scenario-based, practical applications for both athletes and coaches which are grounded in the voices of people with lived and living experience of mental illness

Research shows that coaches fulfil multiple roles as motivators, counsellors, advisers, and parental substitutes — all of which require considerable emotional labour. And athletes must fully understand their own mental health — and that of those around them — to maximize their capabilities. To address these requirements, each of these TWM Sports courses provides tools and skills for adverse situations and the ability to support teammates — skills that apply just as much to people in beer and recreational leagues as they do to top athletes.

A nation of athletes
According to a 2016 Statistics Canada poll, 27 per cent of those age 15 and older regularly participate in sports. That’s more than eight million people across the country in some form of sporting activity, with fun, fitness, and physical health cited as the main benefits. But beyond the average individual, the trend shifts. For elite athletes, who dedicate their lives to professional competition, sports can change from a positive influence on physical health to something that puts mental wellness at risk. For instance, when it means sacrificing friendships and one’s personal life to the pursuit of sporting greatness.

This was one of many insights that emerged out of the development process for TWM Sports. The MHCC partnered with the Saskatchewan Roughrider Foundation to pilot the program with players and coaches, along with other elite athletes from Saskatchewan communities.

After Cindy Fuchs, the foundation’s executive director, saw the potential of having a TWM program designed specifically for athletes and coaches, she immediately contacted the MHCC to ask how she and her team could get involved.

“The Roughrider Foundation is dedicated to supporting health, education, and amateur football in our local communities, and the TWM Sports program weaves perfectly into those pillars,” she said. For Fuchs, TWM also aligns with the foundation’s other initiatives, including Win with Wellness and Game Changers Playbook, a collaborative project with the Saskatchewan Ministry of Education to address youth mental wellness in the province.

Throughout the pilot phase, a common thread in the feedback she received from participants was about how impactful the sessions were. “It forced them to reflect on their own mental well-being,” she said. “I think a lot of the players didn’t realize the stress they were going through until they reflected on it.”

By implementing a box-breathing technique from the program into his game-day routines, one kicker was also able to help his on-field performance. And the program also had a positive impact on team morale.

“You can see that the players who have taken the training have a special bond,” Fuchs added. “They know they can be open with each other about how they feel without any judgment.”

It’s this sense of openness — and the de-stigmatization of mental health in sports — that motivated the foundation to spread the word about the program and cover the entire cost of TWM Sports training for all university athletes in Saskatchewan.

Starting with the University of Saskatchewan, all student athletes — regardless of their sport — will have the opportunity to take the program. In addition, all Roughrider players who give presentations for the foundation’s in-school programs will undergo training, allowing them to share the lessons they learned through the course with young people in the community.

“We want as many athletes as possible to have the opportunity to experience this program — it’s that impactful,” Fuchs said. “How cool would it be for a player to be able to tell their coach they aren’t having a good day and not have to worry about being benched or blacklisted? It’s about mutual respect and openness to have this dialogue between the two sides.”

Author: Eric Gronke is a marketing and communications specialist at the Mental Health Commission of Canada. A graduate of Carleton University’s Sprott school of business, he has extensive experience in the fields of sports and entertainment. Eric is the co-founder of mssn, a brand dedicated to fundraising and awareness for youth mental health in the Ottawa area.
Photo: Player ambassador Mitch Picton, a current wide receiver for the Saskatchewan Roughriders, leads a wellness presentation at Sacred Heart Community School in Regina SK.