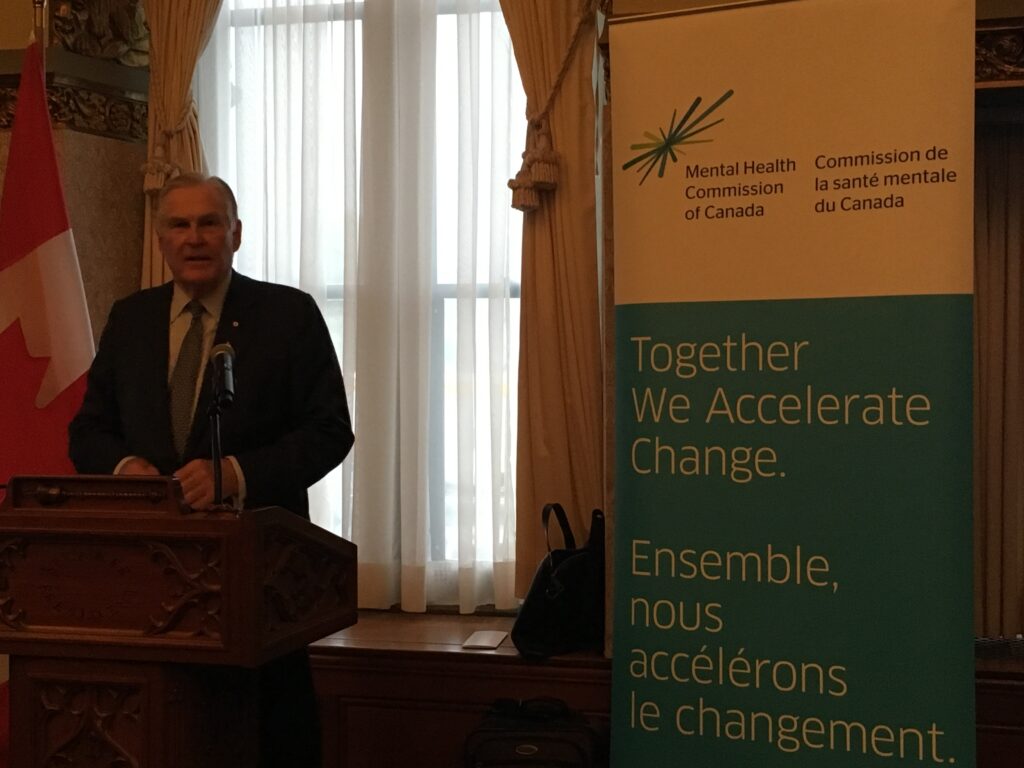 Special Edition: A sit down with the Mental Health Commission of Canada’s Board Chair

For employees, the past two-plus years have been a whirlwind. After COVID-19 threw the world into disarray, people were forced to grapple in the dark and adjust to new work environments.
Read more

When the world shut down in early 2020, industries around the globe were forced into the realities of operating during a pandemic. Perhaps no sector was as hard hit as the airline industry, with many organizations laying off thousands of workers in an effort to keep up with the ever-evolving landscape of COVID-19 travel. WestJet’s organizational well-being manager Lisa Dodwell-Greaves described the experience as nerve wracking.
Read more

To mark the Hon. Michael Wilson’s first full year as Mental Health Commission of Canada (MHCC) Board Chair, the Catalyst team met with him in Toronto in October, to get his reflections on progress to date, and the work still to come.

Catalyst: You’ve been chair of the board of the MHCC for just over a year. What was the most surprising thing you found when you assumed that role?

MW: I thought it was probably the most comprehensive look at mental health that I had seen. This showed up in a number of ways – in the broad Mental Health Strategy for Canada, the program on stigma [Opening Minds], homelessness, the workplace Standard [the National Standard on Psychological Health and Safety in the Workplace], the KEC [Knowledge Exchange Centre]. All of these things fed into what we have to know as an organization, and what – through us – the country has to know as it faces the challenges in dealing with mental illness.

Mental illness hasn’t had the same attention as say, cancer or diabetes.  We are playing catch up but I think we’re doing a really good job.

Catalyst: You’ve set out some specific goals in the organization’s Strategic Plan (2017-2022) for the next five years. What brought about those goals, and what do you see those achieving?

MW: Take the workplace Standard, which is a standard that helps employers deal with mental health in their workplace.  And, as I say to people, we spend roughly half of our waking hours in the workplace. So it’s going to be a very important place where we can identify a problem and then help the employer deal with that problem.

How does the employer talk to the individual, how does he encourage the individual to seek appropriate treatment and support, the person may have to take time off work, how do you manage that? The person wants to come back, how do you reintegrate that person into the workplace?

We have identified 40 companies who have adopted the Standard and asked them a number of questions about how they’ve implemented it. I should say that those 40 are out of 30,000 companies that have downloaded the Standard – so that’s probably one of our most, if not our most, accessed programs.

Catalyst: Leading from that piece on workplace…You’ve been a leader in the finance community of Canada for 40 years – corporate leader, finance minister, chair of institutions, ambassador to the United States…How are your colleagues viewing this effort? Is there greater interest at the highest levels in corporate Canada?

MW: Certainly with the larger corporations they know they have a challenge within their workplace. Disability costs, they know those…30-40 percent of disability costs are from mental illness. Companies like Bell Canada with the Let’s Talk program have expanded the awareness significantly.  I talk to people about it myself.

I have one little example…I said to someone…this was an executive of a large corporation well into the tens of thousands of employees. I said, “Jim, what are you doing with dealing with mental illness in the workplace?” And he said, “Well, we don’t have a problem.”  I told him that was very interesting because based on the numbers that I have seen, his organization would be a statistical aberration because one in five people have a problem of varying degrees in mental illness.

With the work at Centre on Addiction and Mental Health (CAMH), we have a fundraising dinner once a year, and when I walked into the room a couple of years ago, I stood back in recognition that when I started in the field, people didn’t want to talk about mental illness.

Well, now here’s a room full of the movers and shakers from Toronto, men and women, and there they were filling a ballroom, and I said to myself, we are in the big league now.  We’ve reached a point where this crowd of people, who five or ten years ago wouldn’t have given a second thought to going to a fundraiser on mental illness, are here tonight. They’ve realized that maybe their secret little problem around their own home – that my sister Sally, or my husband, George, is living with a mental health problem – is not so unusual. There are a lot of people affected in the same way.

Catalyst: Going forward, the role of the MHCC as a catalyst has raised the level of awareness, is the future role on the same path? Should be they breaking into more programing?

MW: When I became the Chairman I said my view [of the MHCC] is to be a thought-leader and a convener.  So put the ideas out there as to how we deal with the mental health issues in various ways, and then convene, bring people together, whether it’s convening them in a big room, or convening them through the website – as with the workplace Standard.

But we’re not a service provider, we don’t have the capacity nor the budget to do that. We have a lot of very smart people – people with lived experience, our stakeholder community and our advisory councils – who are able to come up with the right programs to deal with the issues…and then make sure that through the Provincial and Territorial Advisory Group (PTAG), the provinces are aware of them and hopefully they will adopt them. We can’t tell the provinces to adopt them, that’s not our role. Our role is to make sure they understand what’s available, what the benefits are, what the outcomes are.  We may also be picking up ideas from them that we may nurture further.

Catalyst: There is a new Health Accord being discussed. You and Louise Bradley, MHCC President and CEO, have put out public calls for more funding. Where should those funds be directed within that mental health envelope?

MW: Well I will give you three areas that I think are very important. One is access, specifically among children and youth. Maybe 25 percent of children who have a mental health problem will get the proper treatment. We have to find ways of expanding that.

Children and youth as a population…we know that 70 percent of adults who live with a mental health problem developed the first signs before age 18 or 20. The more we can identify those problems at an early age and encourage them to seek treatment, the more likely we are to avoid more serious problems down the road.

When Louise [Bradley] and I talk about these, they aren’t expenditures they are investments. Think of the investment you are going to make when you head off a problem at age 15 or age 18, so that person doesn’t have a much more serious problem later in life, affecting their capacity to earn money to support their family, and potentially resulting in far more serious consequences.

The third area, and we’ve had discussions with government on this, and I was in front of one of the government House Committees, is a suicide prevention program. And that’s a national program, but there are certain segments of the population, like in the remote communities with First Nations and Inuit populations, where decades of intergenerational trauma have resulted in higher rates of suicide.

If the government is able to coordinate activities in those three areas, we can certainly reinforce that effort through PTAG.

Catalyst: In conclusion, what has your first year at the MHCC taught you?

I thought I would retire when I left Washington – I had such an energizing experience, learning lots of things, working with talented people. Then I thought, why would I retire if I can get to do something that will keep me going? This is one of those things.

The MHCC has done some very good things, and we have the capacity to do more very, very good things. And I’m delighted to be part of it and continue building that learning curve.